LAHORE, May 4, 2011: Young Doctors Association’s Punjab chapter will resume its strike on May 11 at all the public-sector hospitals.
The decision was taken at the YDA’s General Council Meeting shortly after the “Save Health Convention” at the Allama Iqbal Medical College on Wednesday.
YDA leader Dr Rai Ahmad told Dawn the doctors had been left with no option but to resume strike due to the government’s indifference towards their legitimate demands.
“Young doctors exhibited exemplary restraint though the government continued backing out of its promises on one pretext or another,” he said.
He said the doctors would continue to serve at the emergency and other critical-care departments. A formal announcement of strike would be made at a press conference of the YDA leaders on Thursday (today).
Earlier, the YDA announced it would step up protest against the government “till the acceptance of its demand for a special pay package”. The YDA leaders said a “strong movement” would be launched to make the chief minister and his parliamentarians realise that the doctors were ready to face all kinds of challenges.
Hundreds of medical students and doctors from all over the province reached the convention venue to express solidarity with the YDA. Parliamentarians Dr Amina Butter, Dr Akhtar Malik and Samia Amjad, AIMC Principal Prof Dr Javed Akram, singer Ibrarul Haq, Pakistan Medical Association Punjab President Prof Dr Ashraf Nizami, Women’s Chamber of Commerce and Industry President Dr Shehla Javed Akram and the Punjab Bar Council vice chairman also attended the convention.
The YDA leaders particularly its president, Dr Hamid Butt, used ‘objectionable’ language against the PML-N parliamentarians like Rana Sanaullah and Pervaiz Rashid for “threatening the doctors in the last meeting of the committee constituted by the chief minister for a solution to the doctors’ demands”.
“We are going to wage a war against the Punjab government till the acceptance of our demands,” Dr Hamid Butt announced. He said all the young doctors and their senior colleagues had given the YDA mandate of an “ultimate movement” against the Punjab rulers.
He said the young doctors were ready to face the wrath of the Punjab government. The YDA, he said, had called its general council meeting in couple of days to finalise the strategy.
Speaking at the convention earlier, YDA General Council Committee chairman Dr Haroon demanded resignation of Chief Minister Shahbaz Sharif for his failure to resolve the long-standing demand of the young doctors despite promises.
He said the CM had constituted dozens of committees comprising bureaucrats, technocrats, politicians and health department officials but no concrete step was taken by him to resolve the issue.
The latest 19-member committee also proved bogus, said Dr Haroon who added that now the YDA would decide the future of the government.
Prof Javed Akram said 98 per cent of the primary and secondary health system across the province had been destroyed as “cats and donkeys can be found at the rural health centres (RHCs), basic health units (BHUs) and other health facilities.
“The government’s allocation in Pakistan for health should be at least two per cent of GDP to upgrade the health system,” he suggested.
Ibrarul Haq extended his full support to the young doctors and invited them to become the members of the Youth Parliament to raise their voice more effectively.
PCS Officers Association President Rai Manzoor Nasir said the Punjab government could easily manage a handsome amount for the doctors from the “financial plan of saving Rs80 billion annually announced by his association a couple of months back”.An outburst by Dr Umer Adil of Lahore General Hospital turned the situation embarrassing for the organisers as well as the guests when he spared no one present there while levelling serious allegations and using offensive language against parliamentarians, the media, senior teachers and colleagues besides YDA leaders.
On strong agitation by the participants the YDA office bearers forced Dr Adil to leave the venue.
Meanwhile, the media also boycotted the health convention in protest against his remarks. They later rejoined after the YDA office bearers apologised to them.
(Published in “Daily Business Recorder” on May 5, 2011) 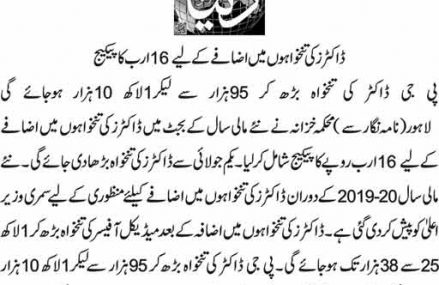